Telangana Rashtra Samithi (TRS) has won the Neredmet division of Greater Hyderabad Municipal Corporation (GHMC) after the counting of votes was taken up on Wednesday following Telangana High Court orders. 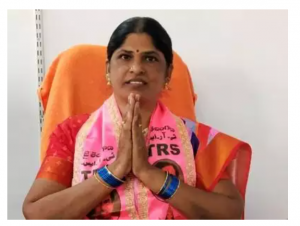 TRS candidate Meena Upender Reddy was declared elected with a majority of 782 votes over her nearest rival Prasanna Naidu of the Bharatiya Janata Party (BJP).

The counting of votes in Neredmet was taken up on December 4 along with the votes polled in all 150 divisions of GHMC.

The High Court had directed SEC on December 4 that if the number of votes with different marks exceed the majority, the result should be withheld.

It was late on December 3 that the SEC had issued a circular declaring ballot papers with distinguishing marks instead of the arrow cross-mark (Swastik) as valid in the GHMC elections.

As polling officers in some polling stations had provided a distinguishing mark instead of the arrow cross-mark for marking on the ballot paper to the voters to cast their vote, the SEC said that all such votes should be treated valid.

The court on December 7 directed that the SEC can treat all the votes with different marks too as valid. It said since the intention of voters was clear, the votes should be treated as valid.

The court dismissed the petition of BJP legal cell in-charge Antony Reddy, who sought a direction to the SEC not to count ballots with marks other than ‘Swastik’.

In an incident that emerged to be rather serious in old city has led to state BJP president Bandi Sanjay demanding a clarification from...
Read more